Back to the top

Amazing Moments of Light & Joy – DUNDU inspires around the globe 2017

We literally kickstarted 2017 performing with our Giants & enchanting @ the Winter Wonders audience on New Year’s Eve in Brussels, then the first trip to Latin America was on our agenda with the invitation to Santiago a Mil – the biggest theatre festival in Chile. Santiago calling – Enclosed you can see the recording of the 10 shows around the capital Santiago with our specially created performance: Luz de Vida directed by Nestor Gahe and performed by the DUNDU Ensemble. After the 30 minutes theatre play, we paraded through most diverse neighbourhoods – from the posh Barrio “Las Condes” to also very poor neighbour hoods such. What all performances had a in common: a great audience that was celebrating “the light of life” with us.

In February, we brought back the balloon girl performances, which was created for the circus Roncalli 2015/2016 with Dominic Ulli and his twins, to Sofia for a big charity circus gala of famous Acrobat Encho and the Sat1 show “It’s ShowTime”: SAT1 aired “The Flying Dreams” – a unique poetic number that slows down the momentum of time and makes it clear that dreams are possible if you only believe in them. We won the category Special Effects through our Swiss-German friendship with Michelle Hunziker and also touched Sasha and Bully in a contemplative moment in the here and now.

At the Special Olympics in Schladming we inspired with DUNDU as a symbol for inclusion in dance with the protagonist of the opening ceremony Maria from the inclusive Vienna dance project “Ich bin OK”. The new song by “Helene Fischer” was subsequently interpreted by the Giants of Light in the pouring rain – symbolically fighting in the audience for a better life together despite of any differences in abilities.

Over Eastern, we inaugurated the International Garden Show in Berlin and rocked under the Champions League Theme as Giant Coach in Vietnam with Edgar Davids and a great local production crew in Hanoi and Haiphang.

We were then in the cultural missions in the near & far – from opening of the Container City at Wagenhallen Stuttgart, the Night of the Museums in Frankfurt to the 25th anniversary of the Goethe-Institute in Krakow (Poland) all the way to Astana for the opening of the Art Fest in the context of Expo 2017 in Kazakhstan as the Giant of Nomad Energy.

In June, a big dream of the ensemble came true with performances as walk-act at the 8-day light festival in Jerusalem in visits to both sides of the border. DUNDU Founder Tobias Husemann was greatly inspired about Giant puppets during his former stays in Israel and during these days some old friends were revisited. DUNDU could spread this momentum of unity in a place that is currently again the stage of political power play. Since March, we had been part of the Social Impact Lab Stuttgart – an incubator for social start-ups – with our innovation of artistic impulses for a better world and the social transformation of our successful art project into an art inspired movement for peace and humanity.
Visiting the wall and talking to people gave us interesting insights and told us once more than art can transmit this feeling of connection, but at the same time there is a need of a clear mutual understanding and we are looking forward to coming back and continue this Journey of Light.

Together with the Worldbeaters from Newcastle we produced with the help of Activate Performing Arts from Dorset a new show: “Sense of Unity” combines the DUNDU magic with the gentle Giant & the Kora sounds fusing with the inspiration of the Worldbeaters, who give the giants a lot of rhythm with the colourful LED drums. After the creation phase at Newbury’s 101th Outdoor Performing Arts Space, we brought the production to the Corn Exchange Newbury, the Greenwich Dockland International Festival, Out There Festival in Great Yarmouth and at the end of this year’s Arts by the Sea at Bournemouth and Lightpool in Blackpool as part of the touring show program of the Coasters Network. The next gigs for 2018 are already pencilled in the calendar with an appearance in Brighton and we are hoping to convince a lot of producers to bring this parading show experience with choreographed sequences and a pyro-inspired finale to Mainland Europe.

Every year we bring the Seoul at the 5tardium to the quake and this time BIMBI was also part of the show and now, we are curious what will happen at the 5 years anniversary 5tardium edition in the Jamsil Stadium in July 2018.

We went to Mykonos the famous Greek party island, where we stirred up the crowd properly at a Burning Man Theme Party at Ftelia Beach and the marvelled the Chora Nightlife from Cavo Paradiso over Scorpios till the white-painted tiny streets of bars and clubs that are filled with party people from all over the world

“DUNDU on Fire” was the feeling at the Phoenix Fire Convention, where we celebrated a spacy gala show with the best fire artists from all over the world and created LED inspired momentum at the fire space.

Art Revolution was the creed and echo of the press in our fifth appearance in Saudi Arabia – under the direction of Marco Boarino from Italy: an unique event took place in Yanbu with public art, a 60 meter wide container stage and sharing the light spirit: In three show parts we made a “Homage to Eid” and united in the final with Molecole (aerial balloon acrobatic) and the fire people from Salamandre on the occasion of the festivities for the Eid festival – which we would like to bring on to other locations of the Muslim world in 2018.

Design Thinking thought-leaders were allowed to try out the new Puppet Thinking approach At the D.Con Festival at the School of Design Thinking in Potsdam, DUNDU was the visual highlight and with the interactive keynote – Fabian Seewald addressed the collision of Design Thinking and Puppetrywith excellent feedback and we are looking forward to bringing this forward to the d.school in the Silicon Valley.

Puppet Thinking is a three-step iterative process in which groups are artistically and co-creatively prepared for design thinking, building their own dolls as prototypes, learning animation techniques, and then sharing their own stories with the characters.

In October, we were invited to showcase our theatre play “DU UND DU” under the direction of Sebastian Kutz at the famous puppet theatre festival in Ostrava in the Czech Republic. Karolina, a former mining storage hall was our home and a great location Karolina to stage our 40-minute theatre play: 700 enthusiastic visitors enjoyed the new adaptation with Bimbi and a new musical approach. The next theatre project is coming up already: on April 6, 2018, we are back to the theatre and will organize an interactive evening on our own direction in the Theaterhaus Stuttgart: Save the Date and stay tuned.

After the intense theatrical time, we went international again around the globe: First we were invited to the United States and in Chicago we inspired as a show-act at the “Workday Rising” before we handed over the stage to Gwen Stefani.

The jet set tour life then brought us directly from Chicago to Wuhan to present the emotional highlight at a corporate event in the imposing Han Theatre with DUNDU, BIMBI and Baby DUNDU. The next outing in China was the Tmall Double 11 Gala at the Mercedes Benz Arena in Shanghai, where we visually staged a poetic act with live vocals and made a big hit in the biggest shopping festival on earth.

In December, we had a brilliant weekend in Belgrade in Serbia at the opening of the Christmas market. Before departing, we shared the light of the small DUNDUs also in a social orphanage and gave a pre-show concert.

Proper winter and Christmas atmosphere was on for DUNDU on December 15: Deep snow challenge at the highest brewery in the world. On the occasion of a corporate Christmas party on almost 2000 meters, we created an interactive show with the FireDancers and enchanted in the Asitzbräu with contemplative moments with live music in the Ice.

Next to the 5tardium Festival in Seoul, another constant in the DUNDU calendar is the SEMF: With a promotional booth in the atrium and impressive performances in the dancing packs to the great fathers and who´s who of the electronic music scene like Sven Väth, Solomon or Nina Kraviz

Wow – and that was just a selection of the moving moments this year – we made the last move from the “Wagenhallen” in parallel and set up our own rehearsal hall. Tobias tinkers at the next show sensation that will be presented in the course of 2018.

Stefan Charisius – our musical director and co-founder – has launched his new album “Hommage an DUNDU” and is currently touring back in West Africa – specifically in Guinea – to promote his own music there and meet and surprise the current president Alpha Conde his song ” Hommage à Alpha Conde “. One of his goals is to bring the DUNDU Giant to the West African countries for the first time with a concert tour next year and to give positive impulses for a better coexistence through the path of art and music.

The ensemble says goodbye to a short Christmas break, the beginning of January is again filled with the Cabalgatas in Spain, the Best of Events and some New Year’s kick-offs and the next Arabic adventure for the opening of the National Science Museum in Kuwait.

Merry Christmas. Thanks for everything. Keeping in touch and sharing the light.

Subscription to our newsletter open soon. 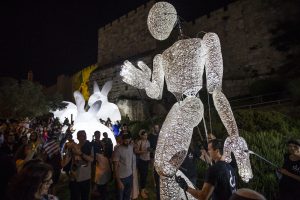 DUNDU in Israel – Sharing the Light beyond all borders 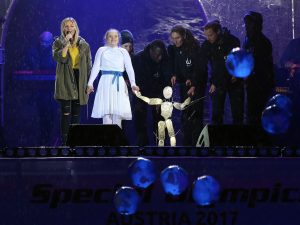